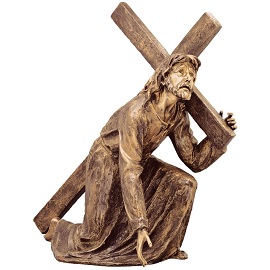 Bronze has long since been utilized by many ancient civilizations to produce works of art, both functional and non-functional. Bronze quickly became desirable not only for the aesthetic appeal, but also because when molten, it has the ability to capture and hold the finest details as it expands when it is hot, filling in even the smallest parts of the mold, and compresses when it is cooled, allowing easy removal from the mold. The warm, natural glow of the material offers a striking visual effect, and the overall piece is very resistant to the elements. As bronze ages, especially when placed outdoors, the color of the metal deepens, and eventually, gains a rich patina, which many find very desirable. Bronze sculptures today can be seem across the globe, everywhere from commercial buildings to public parks, and even as accents to cemetery monuments. The elegant beauty that these pieces provides can certainly bring a touch of class and sophistication to any setting. 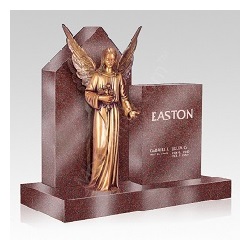 For decades European designers have created memorial designs combining bronze and granite, which is evident in our Specialty Grave Headstone section, creating some of the most beautiful memorial tributes, such as in the photo to the right. Combining metal and stone creates an esthetic contrast that cannot be replicated by only stone or bronze, or even the combination of different types of stone. Stunning statuary, from variations of Mary, Jesus, graceful angels, saints and Michelangelo's Pieta (Christ lying on Mary's lap), are just a few available from hundreds of other designs. These statues can certainly evoke powerful emotions. For example, the pained and exhausted European depictions of Christ are very moving, as the details of the piece allow the viewer to practically feel the emotions captured.

When, Where and How Are Bronze Statues Created?

It is quite interesting that while the tools utilized to craft these pieces have certainly evolved, the basic process remains the same as it was from the days when our ancestors first developed them. Chinese dynasties are famous for first creating bronze pieces. While this culture was the first to utilize bronze for decorative and religious items, it is the Greek culture who actually first created the life-size sculptures that quickly became so sought after. So, for the purpose of this text we will concentrate on the latter uses of bronze by other civilizations. Our article, A Brief History in the Art of Bronze has more information on the initial processes and uses for bronze.

By the sixth century BC, the technology of bronze-casting was very sophisticated. Initially, small bronze objects and tools were solid cast in two-piece clay molds. This method is called the 'Lost Wax Method', which began with an artisan creating the initial sculpture from an oil-based clay. Oil-based clay was utilized for this first sculpture, as water-based clays dried out far to quickly, not allowing the artist to render the form to their liking. The oil-based clays were also more ideal as the artist could not only take the time necessary to capture all the detail, but also go back to fix or adjust other parts of the sculpture as the work progressed. Once the initial clay form was complete, a two-part mold was then created from the sculpture. Once the mold is prepared, a wax form is created, from which a mold is also pulled, which allows the artist to then create a triplicate of the piece, which is cast hollow. The triplicate is then prepared for the bronze, by placing creating a network of wax rods around the piece, and placing the sprues in. The network of wax rods allow and holes to allow the gasses, that come from the molten metal, to escape when the final piece is poured. Usually a core is also crafted, especially for larger pieces that are to be hollow. The piece is then placed in an encasing of plaster, and is heated. The wax melts from within the encasing, and the piece is then ready to receive the molten bronze. Once the bronze is poured, the plaster casing must be removed by hammering and chiseling the entire piece. Once the was from is freed from the casing, it is chased and polished to remove the markings from the supports and vents. Needless to say this is a very basic description of a truly arduous process.

From 1,500 BC forward, larger pieces were being hollow-cast in bronze using the lost-wax method. Initially, large scale bronze statues were usually cast in pieces no larger than about 3 feet. There are several reasons for this. First, as noted, the most two men could handle was a crucible holding about 2 gallons of molten bronze weighing 150 lb. Second, bronze must be poured fairly rapidly or it will begin to cool and it will not pour uniformly. If the bronze is not at just the right temperature and state of fluidity, the casting may fail, resulting in the bronze cracking and becoming deformed as it cools. The ancient founders understood these constraints. One of the reasons for adding some lead to a copper-tin bronze is that the lead both lowers the melting point of the resulting alloy and makes the molten metal less viscous so it pours more easily. It appears that once in their clay mantles, these separate statue pieces were placed in casting pits such as those found on the Agora at Athens. Over time the methods where perfected more and more and the finishes changed. Overall the same techniques are applied today as they where in the old Roman days.

Today bronze statues are found everywhere from old cemeteries to homes and gardens, and can often be found in commercial areas, such as the entrances to large corporations. Bronze is truly a material that is only enhanced with the passage of time, as it starts with a lustrous shine, which evolves into the well known color of patina, with a touch of green. The bronze statue can always be refinished but will always go back to that appearance, due to the weathering of the material, over time.

Memorials.com brings to you bronze statues from the finest manufacturers in Spain. We have found for you bronze statues with exceptional design and craftsmanship. Developed by Europe's leading bronze fabricator products these are works of art combining the best of modern and traditional European design. Our bronze statues have an outstanding, lustrous finish achieved through a proprietary powder-coating method, to ensure that the piece will not only be visually stunning, but also resilient.

See all your Bronze Statues choices