Caskets made from Steel is the Popular Choice Today

Steel is a material renowned for its strength and integrity. It stands without reason that this popular material would have been eventually incorporated into the creation of caskets for funeral services. Stainless steel is an allow steel, in which different metal alloys have been added to modify the strength and appearance of the steel. Steel caskets have quite an interesting history in the death care industry. This is obvious by the the many intriguing 'custom-made' steel caskets that are on-display at the National Museum of Funeral History, and many other museums throughout the world. On a side note, these 'custom-caskets' may sound in a way outrageous or even gaudy to some, but to others they provide a dignified, yet highly personalized tribute, that provides a final farewell that is as unique as the person it memorializes. In fact, many families who have selected these highly-personalized caskets often leave the memorial service with a smile, that was brought on by the whimsical and unforgettable appearance of the casket they selected. Some of the steel caskets that are part of the museum’s “A life well lived” display include steel caskets sculpted in the form of an airplane, an Eagle, a car, and even a Lobster. These steel caskets are all intricately designed to capture the fun-loving spirit of the loved-ones who will ride in them to eternity. That is not to say that all steel caskets have to fall into this 'custom-casket' category. On the contrary, steel caskets are typically very simple in appearance, decorated only by the interior bedding, color and common fixtures on the casket body, such as corners and handle bars. Steel caskets, more than anything else, provide a dignified and peaceful final resting place for our loved ones.

Aside from their colorful history and display, steel caskets, which have, in the last 30 years, returned as king of the casket industry, also have a very important history. Here are a few highlights: 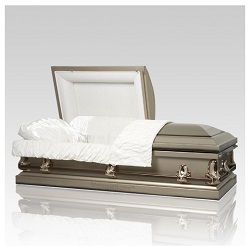 The word casket itself, as it is currently used as a interchangeably with coffin, owes its modern meaning to the advent of steel caskets. In the nineteen and early 20th centuries, caskets were known exclusively as coffins and they were almost all made of wood. Interestingly, coffins were ordinarily made by the town carpenter, who, as a result, usually oversaw all other funeral arrangements for a family, rather than a funeral home cemetery. As the Industrial revolution took hold across America, that trend gradually changed as steel became more readily available for use in making steel caskets. Consumers in those days were squeamish about the idea of decomposing bodies, and they felt most comfortable with steel caskets because they were under the false impression that a steel casket could and would preserve a body for longer periods of time than their wood counterparts. In reality, experts have discovered in recent years that steel caskets, or any airtight enclosure for that matter, and for a variety of reasons, can actually tend to speed up the decomposition process, as the lack of air promotes the growth of bacteria. Experts are now careful to warn consumers that no casket, no matter how sturdy or, especially, airtight, can be expected to keep decomposition at bay for more than a few days. When a feature such as 'airtight' is promoted, it is more for the purpose that the elements or any outside organic matter will enter the casket once it is sealed. But, again in the earlier years, many thought otherwise, and so, steel caskets became by far, the most common type of casket in America by the early years of the 20th century, even though they were usually still quite simple in appearance. Despite their popularity, they were still called “steel coffins,” about that time, rather than their more popular name, casket.

Eventually, competitiveness in the memorial industry led one or more sellers to remake the image of caskets into a more luxurious product. The exterior of the casket was then painted into rich, or stylish colors, and the interiors became plush and highly decorative compared to their earlier versions. The new steel casket interiors began to feature elegant stitching, pleating, or even, in some cases, embroidering. To this day, tailors are often used to create the beautiful interiors for these, and any, caskets. Since many caskets of that time resembled larger versions of the jewelry “casket,” the makers of steel caskets decided to use “casket” as a marketing euphemism for coffin, and the name has stuck ever since. Steel caskets are occasionally, today, referred to as coffins, but, in general, that term is applied more to wooden coffins. Steel caskets, meanwhile, still almost exclusively enjoy the luxurious connotations of their euphemistic new name.

Armed with their new name, steel caskets went on to outsell wood caskets by the millions through the early 20th century. The only time that steel casket sales ever really slowed, or came to a complete stop almost, was during World Word’s I and II, as most metal, and especially steel in America, was required for the war effort. So as a result, for about 20 years, steel caskets took a back seat to their hard-wood cousins for the first time since they were created. Once the wars were over, however, Americans could not wait to jump back upon the bandwagon for steel caskets, and the product quickly became the best selling in the industry again. In fact, steel and metal casket sales soared almost instantly after they became available, as many were looking to break away from the traditional appearance of wood caskets. Steel caskets offered a way to do just that, while still maintaining a noted air of respect.

Since then, steel caskets remain the best seller, even still today. It should be noted, however, that while steel caskets are still among, if not, the most popular choice for many, they are becoming more and more challenged by their wooden counterparts, as many are becoming aware that steel caskets are really no different than wooden caskets, as far as preservation goes. Aside from that, as more and more people become environmentally conscious, they are turning to wood caskets for their natural appeal.

See all your Steel Caskets choices