What do the Colors of the American Flag mean? 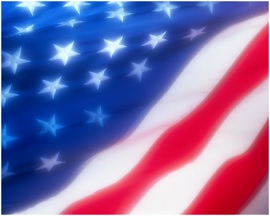 There is no denying that the pattern and colors of the American Flag are easily recognizable around the world. The American flag, for many, stands for valor, perseverance, and justice, but many are not aware that the colors bear great significance. While many know what the shapes which make up the flag mean, such as the thirteen stripes represent the thirteen original colonies, they do not know that the colors used in these patterns actually encompass what many already feel the flag means to them. Since the first use of our national flag, which was meant to represent a living country, the flag has held a strong significance, and itself should be considered a living thing, according to the Flag Code of Conduct, which was established in the early 1940's in response to companies using the flag in advertising campaigns. This enforces that our flag should be treated with utmost respect, regardless of one's political background or views. Here is a little information on how the significance of colors was adopted to our flag.

"On July 4, 1776, the Continental Congress passed a resolution authorizing a committee to devise a seal for the United States of America. This mission, designed to reflect the Founding Fathers' beliefs, values, and sovereignty of the new Nation, did not become a reality until June 20, 1782. In heraldic devices, such as seals, each element has a specific meaning. Even colors have specific meanings. The colors red, white, and blue did not have meanings for The Stars and Stripes when it was adopted in 1777. However, the colors in the Great Seal did have specific meanings. Charles Thompson, Secretary of the Continental Congress, reporting to Congress on the Seal, stated:

"The colors of the pales (the vertical stripes) are those used in the flag of the United States of America; White signifies purity and innocence, Red, hardiness & valor, and Blue, the color of the Chief (the broad band above the stripes) signifies vigilance, perseverance & justice."

Also this from a book about the flag published in 1977 by the House of Representatives...

"The star is a symbol of the heavens and the divine goal to which man has aspired from time immemorial; the stripe is symbolic of the rays of light emanating from the sun."

The quote below concerning gold fringe on the Flag is from the book "So Proudly We Hail, The History of the United States Flag" Smithsonian Institute Press 1981, by Wiliam R. Furlong and Byron McCandless.

"The placing of a fringe on Our Flag is optional with the person of organization, and no Act of Congress or Executive Order either prohibits the practice, according to the Institute of Heraldry. Fringe is used on indoor flags only, as fringe on flags on outdoor flags would deteriorate rapidly. The fringe on a Flag is considered and 'honorable enrichment only', and its official use by the US Army dates from 1895.. A 1925 Attorney General's Opinion states: 'the fringe does not appear to be regarded as an integral part of the Flag, and its presence cannot be said to constitute an unauthorized addition to the design prescribed by statute. An external fringe is to be distinguished from letters, words, or emblematic designs printed or superimposed upon the body of the flag itself. Under law, such additions might be open to objection as unauthorized; but the same is not necessarily true of the fringe.'"

The gold trim is generally used on ceremonial indoor flags that are used for special services and is believed to have been first used in a military setting. It has no specific significance that I have ever run across, and its (gold trim) use is in compliance with applicable flag codes and laws.

It definitely goes without saying that the American flag is one of the most prominent and powerfully moving symbols that represents our country. Many Veterans and fallen soldiers have fought under the banner with great courage, and while not all fought for the politics at play during that time period, all will attest that they fought for everything that the flag signifies. As Adrian Cronauer once eloquently said, "The American Flag represents all of us, and all of the values we hold sacred."