Human and Pet Burial Together 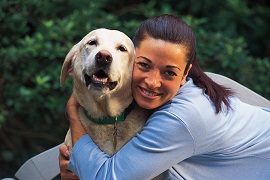 An intriguing question has raised its head in recent years: is human and pet burial together weird or normal? This article may not offer any decisive answers to that question, but, for many readers, just knowing that the debate has attracted attention even from the scholarly halls of academia will likely be a curiosity worth knowing more about. Here is some background.

This issue, while it has been discussed thoroughly for decades (at least), came to light as a matter of much recent public debate in a case that receive much media coverage throughout the United States. In this case, the United States Military came down firmly on the side of “weird.” In a nutshell here is what happened: Members of a Washington D.C. area military installation's office staff were severely reprimanded when it was discovered that the remains of several U.S. soldiers who had died in armed conflicts had been sent to a crematory that conducted cremations for both humans and pets. The operators of the crematory defended

their practice by assuring the public that humans and animals were never cremated in the same crematorium, but, nevertheless, the idea that men and animals were cremated at the same facility was too much for many family members to handle emotionally. So, while the practice of conducting cremations of both animals and humans in the same location remains common (and perfectly legal) today, American military leaders have made it clear that American soldiers will be cremated only in facilities devoted exclusively to human cremation. While this case does not address the question, specifically of whether human and pet burial together is weird or normal, it can probably be safely assumed that American military officials would probably object vigorously to any case in which soldiers were to be buried on the same hallowed grounds as pets.

This is not to say that there are not a few instances in which pets have been buried discreetly in the same plots as their owners. Several such cases have, ironically, made headlines over the course of the late 20th and early 21st centuries. Each of these cases has almost the same twist. An eccentric, rich aristocrat dies with few close friends and places a special final request that his or her beloved pet accompany him or her in her grave (occasionally, the pet has been put down, specifically, to honor this request – and those who find this a barbaric practice might find it even more troubling to know that in Medieval days, noblemen often ordered their faithful surviving servants to be buried alive with them). The final request is then usually honored very discreetly, but, unfailingly, the word leaks to family members of other people buried in the same grave yard, some of whom find themselves outraged to know that their loved one shares a cemetery with an animal. (These people would most certainly find themselves in the “weird” side of the debate.) The resulting discussions usually involve lawyers and judges and, eventually, the family of the human buried together with a pet, exhumes the remains and moves the animal's remains to a cemetery intended exclusively for pets. In all but the rarest of these cases, the law typically sides on the “weird” side of the debate. There are almost no cemeteries in the United States that allow (other than very discreetly) the burial of an animal on the same ground as humans.

But all is not lost for those who believe that human and pet burial together is normal. There are (by some estimates) thousands of cases in which a pet was buried with its human owner and, even decades later, no one has ever registered a complaint. Because human and pet burial together is a bit of a taboo subject in our modern society, there is no way of knowing exactly how many people may have sneaked their beloved friend past their cemetery's watchdogs somehow and are currently spending eternity with their pet. But it is certain that there are some such cases and that not everyone with an opinion on this issue is as convinced as most seem to be that it is a weird practice after all. 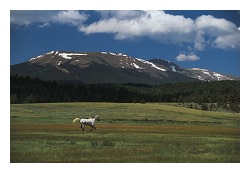 For those who are interested in having a treasured companion animal lain to rest with them upon their passing without the secrecy, there are a variety of options to consider. The popularity of cremation (of both people and pets) has a great side-effect, and that is that it allows families a number of ways to dispense of the cremated remains. Many find that scattering the ashes of their loved ones is an appropriate way to say goodbye to them - especially for those who loved to be outdoors or lived their life on the road - but this means of disposition can also be appropriate for those who have had their pets cremated, and will eventually themselves, be cremated. A wish to could be left to their friends or family that they wish for their ashes to be mixed with, or simply spread at the same time and place, as their treasured companion, in a meaningful location. This is, in a sense, one of the most beautiful ways to commemorate the love for the pet, as the two will then be free to roam their favorite location together, for all eternity. There is also the option of nontraditional outdoor memorials, which are quickly gaining popularity. These memorials offer a rustic and elegant tribute, in which the ashes of the pet parent and companion animal can be placed together. The durable memorial will forever keep the two together, protected form the elements for all eternity. These are just a couple of the endless options available for memorializing the life of a person and their companion animal, and the love that they shared.

Philosophers, anthropologists, and others in academia will have much to discuss on this topic for years and years to come, but perhaps the only accurate answer to whether human and pet burial together is weird or normal is to say, simply, “It depends upon your perspective.”