174. Time and occasions for display

175. Position and manner of display 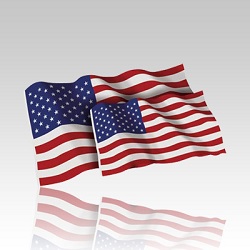 The flag, when carried in a procession with another flag or flags, should be either on the marching right; that is, the flag's own right, or, if there is a line of other flags, in front of the center of that line.

No disrespect should be shown to the flag of the United States of America; the flag should not be dipped to any person or thing. Regimental colors, State flags, and organization or institutional flags are to be dipped as a mark of honor.

During the ceremony of hoisting or lowering the flag or when the flag is passing in a parade or in review, all persons present except those in uniform should face the flag and stand at attention with the right hand over the heart, just as during the National Anthem and Pledge of Allegiance. Those present in uniform should render the military salute. When not in uniform, men should remove their headdress with their right hand and hold it at the left shoulder, the hand being over the heart. Aliens should stand at attention. The salute to the flag in a moving column should be rendered at the moment the flag passes.