You are here: Home -> Flag Cases 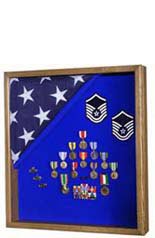 Medallion Cases
Starting at $117.95
Over 5 Products 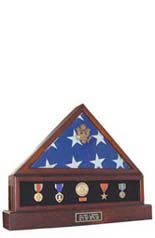 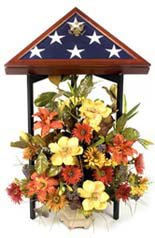 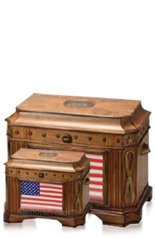 Guidance on Military and Veteran Shadow Boxes and Flag Cases

For decades, the American Flag has been a symbol not only of our country, but of what our founding fathers fought for: Liberty and Justice. It is only befitting that this national, if not worldwide icon would be used to pay tribute to our fallen heroes, especially those who sacrificed their all, not only for their country, but for everything that the flag represents. Ours is the only country that has the tradition of honoring Military Veterans who have passed and fallen soldiers with the national flag, and this alone denotes the importance of the awarded flag itself. This 'burial' flag becomes more than a simply symbol of our country, but it becomes an honorary tribute, especially for the families of the brave. The flag takes on a new meaning, and for many, even represents the characteristics that our loved ones demonstrate to earn it. That said, it is clear why we must preserve this flag, not only for the memory of our loved ones, but for our future generations, as this flag is a symbol of everything that not only our country should be, but of we, as individuals, should live up to.

Flag display cases designed as tributes to United States military veterans are available in a multitude of styles, ranging from shadowboxes, medallion display and medal cases, to the simple flag display case. Regardless of the style, though, flag cases, especially those incorporating a medallion case to display awards and military coins, are perfect for building a memorial in your home or place of business, to honor the memory of a cherished United States military veteran. All flag cases ands shadow boxes are designed to hold our US American Flag delivered to the family of every deceased military veteran. And, as stated before, many models are built to also display military medallions, medals, and other memorabilia of the veteran’s military life. While the simple flag cases are perhaps the most popular, the memorial flag chests are gaining popularity, as families can place not only the flag and medallions or coins in the chest, but also any news clippings, letters, jewelry, or any other small articles of personal memorabilia that was important to the soldier the flag was awarded to. While one is not able to hang the flag up, the chest can still be displayed open, or kept close to help preserve its precious contents. Another new addition to the standard flag case is a memorial pedestal urn, upon which the flag case can be placed. This 'pedestal' actually holds a set of cremated remains, which is perfect for families who wish to keep the ashes and the burial flag together. Many of the flag cases and chests also come with a free engraved plaque, to identify the person the flag was intended for.

The American flag in itself has been, and will perhaps always be, a symbol that ties us, as Americans, together, regardless of race, social status, or age. The feeling of pride felt by many when seeing, and especially displaying our flag is perhaps best captured by Adam Goodheart in the 'Prologue of 1861: The Civil War Awakening': " Before that day, the flag had served mostly as a military ensign or a convenient marking of American territory, flown from forts, embassies, and ships, and displayed on special occasions like American Independence day. But in the weeks after Major Anderson's surprising stand, it became something different. Suddenly the Stars and Stripes flew - as it does today, and especially as it did after the September 11 attacks in 2001—from houses, from storefronts, from churches; above the village greens and college quads. For the first time American flags were mass-produced rather than individually stitched and even so, manufacturers could not keep up with demand. As the long winter of 1861 turned into spring, that old flag meant something new. The abstraction of the Union cause was transfigured into a physical thing: strips of cloth that millions of people would fight for, and many thousands die for." Our line of flag cases offer families new and innovative ways to create memorials that they can truly be proud of. Again, these cases will not only preserve the flag and any other remembrances for us, but for our many generations to come.

Quick Questions and Answers about Flag Cases and Military Items:

Can you tell me how to fold my flag?
There are certain steps and rules to folding an American flag, which are made easy through our instructional page! Please click here for flag folding instructions.

Can you tell me how to open the case for my flag?
Some flag cases have hinges and can be opened from the front others have to be opened through the back by the use of a screwdriver.

How fast can I expect me flag case?
Usually we send them out the next day and it takes about 5-10 business days for delivery. We have 2nd day delivery available for an additional cost.

Where do you place the engraving?
The engraving is placed on a brass plate and the plate can then be put on your flag case. It comes with an adhesive back to it.

Do you have advice on how to clean the flag case?
We recommend using "Windex" for the glass and "Pledge" for the wood.

How do I hang my flag case?
We have included a free wall mounting kit.

Where do you make the flag cases?
Our flag cases are made in the United States.

Does the flag fit in the case?
US Government issued flags that have a measurement of 5" x 9 ½" will fit.

Can you tell me what the flag is made out of?
US Government flags are made from of cotton. 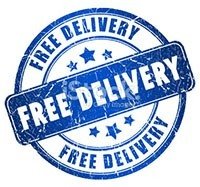