How to Store, Handle, and Display the U.S. Flag

Our national flag has been a symbol of liberty and unity for more than 200 years. Since the early days of our nation, when Betsy Ross first stitched together the initial banner, many citizens found, and continue to find, the flag to be a great source of personal strength, which embodies everything we as Americans should strive to be. It is quite interesting to note that according to the Flag Code of Conduct, because the flag embodies a living country, it should be treated as a living being. It goes without saying that many have fought to protect not only our nation, but the very integrity that the American Flag represents. Handling and Displaying the American flag, therefore, is something that should be done with prior knowledge and great respect. Since the early 1940's a Flag Code of Conduct was created, which are basic guidelines on how a flag should be handled. While these 'guidelines' are not an actual law that is punishable if not followed, they are still a great source of knowledge which any responsible American should be aware of, and when possible, follow when handling the flag. Below is some information on ways Americans show respect for the Flag of the United States. We will add to this list occasionally. Please contact us with suggestions for material to include. 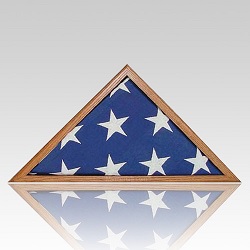 When not on full display on a staff or flag pole, the United State's flag should be folded in a very precise manner. The way in which the flag is folded is rich with history and tradition, on which there is more information in the Folding the US Flag article. It should go without saying that it should not be crumpled up and shoved in the corner of the garage, but instead, neatly folded and secured in a spot where it will not be in direct contact with anything that can soil it. The triangle fold is acutally not required for everyday storage of the flag, but is reserved for special flags, such as those presented in a burial, or a flag used during a significant event; which would then be placed in a special frame or container, or flag case, such as the frame to the right, for storage. For flags that are presented and stored at home, a rectangular fold is recommended. It is customary that the flag is displayed at sunrise, and retired at sunset, but if the flag is properly illuminated, it is acceptable to leave it on display during the nighttime as well.

The U.S. flag is customarily carried to the right or centered in the front of all other marchers in a procession. As the procession passes, everyone in its presence customarily stands at attention facing the U.S. Flag. Anyone in military uniform customarily gives the flag a military salute. Men wearing non-religious head dresses should remove them with the right hand, and hold them towards the left shoulder, with the left hand over the heart. Similarly, any non-military civilians should salute the flag by placing their right hand over the heart. Those who are not American citizens can also pay respect to the flag by standing at attention or participating in the customary salute that would be appropriate.

The Pledge of Allegiance and National Anthem:

United States citizens customarily stand at attention and face the United States flag when the Pledge of Allegiance is being recited or the National Anthem being performed. Even if the flag is not on display during the anthem or pledge, one should still stand as if saluting the flag, with the right hand over the heart.

Respect of the Flag:

The United States Flag Code has specific instructions for ways the flag should be cared for and respected. They include the following:

Disposal of the Flag:

Many are under the false impression that if the flag touches the ground, it is no longer suitable for display and should be disposed of. According to the Flag Code of Conduct, this is incorrect. If a flag happens to touch the ground, it should be corrected immediately by hoisting the flag so that it does not touch anything below. If it becomes soiled, it is appropriate to clean the flag with a mild soap, by hand. In the days of old, flags that were too tattered or worn to be appropriate for display were honorably discarded, usually through a ceremonial burning. But, now in days flags are made of long lasting materials such as nylon or other petroleum-based materials, which can be hazardous to burn, as they release toxic gases into the atmosphere. While it is true that flags that are worn or tattered should be destroyed in a dignified burning, now in days it is not recommended that the flag be burned. Instead, it is highly recommended that an individual needing to dispose of a worn flag contact their local VFW chapter, American Legion Posts, or even Boy or Girl Scouts troop, who routinely conduct flag burning ceremonies on Flag Day.

See all your Flag Cases choices