What to do with a Memorial Flag from the Funeral Casket 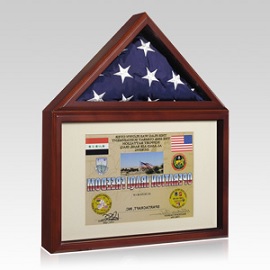 Memorial flags abound across the United States and plenty can be found on display in every city, probably just about every neighborhood too, on every patriotic holiday, from July 4th to Memorial Day to Veterans Day to President's Day. And even very special anniversaries – such as the recent 70th anniversary of the Legendary Invasion of Normandy by American troops and their allies – are days for the Good Ole' Red White and Blue to be seen in full glory on nearly every corner.

The American Flag is more than just a symbol of great freedoms and patriotic fervor. It is also a great national sign of respect, admiration, appreciation and gratitude for American military personnel, past and present and, particularly, those who made great sacrifices for the nation on the battlefield or elsewhere.

What follows is a brief guide for the basics of what a family should know if it wants to make sure veterans in its care are given all proper, official, dignified military honors due to them on their passing.

Memorial flags, especially those presented to the family of a deceased soldier, have two distinct sizes. Most of the flags are 3 feet by 5 feet. These flags, while suitable for flying anywhere, generally are not flown but, rather, wrapped into the traditional triangle fold and presented with the intentions that they will be placed on display in a specially made flag case, often one that includes a storage spot for a soldier's metals and other memorabilia from his or her time in service. 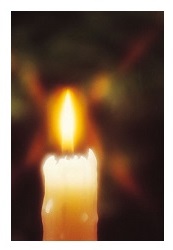 The other most common flag size is 9 feet by 5 feet. These flags, much larger than the size traditional given to most veterans, are typically presented to a deceased soldier's family as well, but only after they are first flown outdoors over a significant building or special spot (such as the United States Capital or a war memorial or some other historically significant place). These flags are typically reserved for those whose service is receiving special honors, such as that of a general whose career was especially storied or a soldier who died in combat. These larger flags are often draped over the deceased's casket as part of a memorial service and then, just before burial, military pall bearers remove it from the casket and fold the burial flag in a ceremonial manner into the famous triangle fold before finally presenting it to the family of the deceased who are then, by custom, free to display the flag in any manner the family members see fit. Occasionally, the flag is unfolded and flown over some place that is special to a family on patriotic holidays, but, most often it is preserved for the ages in a military flag case suitable for display – either public or private – in an indoor spot that was special to the deceased.

Still other sizes of memorial flags are available from most retailers that sell flags, but the sizes we mention above are in keeping with formal requirements for the United States Flag as spelled out by military tradition and even Congressional legislation aimed at preserving uniform laws regarding the flag. While these are the flag sizes that the government typically produces (or buys from private manufacturers) for its purposes, there is no law prohibiting the sale and use of the United States flag in a different size. Many retailers sell a wide variety of smaller sized flags (usually 6 inches by 15 inches or somewhere along those lines). These are often marketed as memorial flags and have a wide variety of memorial uses, such as, for example, the lining of the grounds of a cemetery on a special day of remembrance.

Various Components of a Flag

United States flags today are made from a variety of different materials and include a variety of different features. But the specially made memorial flags presented to families during the memorial services of deceased soldiers have several key features that are required – by Congressional order – of flags purchased (or made) by the U.S. military. (These features are available in flags that can be purchased by the general public too, but not all flags purchased by the public necessarily include the features.)

Here is the list of the specifications that all government issued memorial flags (also known as internment flags when they are the 9 feet by 5 feet size) must adhere to:

All memorial flags must adhere to a 1 to 1.9 hoist to fly ratio: hoist is the smallest side of the rectangle flag, the side the runs parallel to the flag pole, and the fly is the longest side, the side that runs perpendicular to the flag pole. The flags must also be made of 70 Dernier nylon fabric (a dernier is a unit of measurement for the thickness of a piece of cloth), with heavy canvas white duck heading on the hoist side and solid brass grommets sized to meet strict standards established by congressional military code. It may be surprising to learn that even the size of the white stars in the blue star field have been specifically addressed by military code. (The size 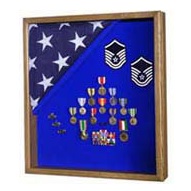 specifications are much too complicated to address in this article, but a simple search engine request will yield plenty of interesting discussion about this matter, including various interpretations of the rules that lead to different looking productions of the flag.) The fact that the flag must be made of nylon, of course, from the flag's earliest days when cotton was the go-to fabric for most purposes. It it is interesting to note that Congress continues to make a provision for cotton flags, though those are not used with any regularity today in military proceedings. If used, however, official military burial flags must be made of 2-ply mercerized cotton.

Memorial flags are used in a variety of ways to honor a deceased military member. As we mention above, memorial burial flags are often draped over caskets of military personnel who have died in the line of duty, and then those flags are removed from the casket and folded to be presented to the family just before burial. (It is important to note that the burial of an American flag is not in accordance with congressional code except in cases in which a battered or torn flag cannot be burned in a practical manner. Generally speaking, burning is the only officially excepted way in which American flags are to be disposed, and, further, the burning is formally required to take place at a flag retirement ceremony. Many Boy Scout troops train their members to conduct these ceremonies and hold them occasionally as a public service to members in their community who have an old flag to dispose of.) Once the memorial flag is folded into the traditional triangle and presented to a family, the options for its use are almost endless. Out of respect to the dead, these flags are typically flown again only on very special occasions, but they are often placed on permanent display in a home or some public place – such as an office where the deceased person made his or her headquarters. When they are displayed, they are usually placed in wooden boxes that have a glass or plastic protective sheet built in so that the flag has the appearance of being framed. These boxes often are decorated with a bronze or silver plaque engraved with the deceased's service dates and, sometimes, a favorite quotation. These boxes are often outfitted with a side box in which medals and other memento can be stored. While, as we say, these boxes - known as flag cases - are usually outfitted with a transparent front, they are also sometimes made with a solid front, through which the flag cannot be seen.

How to Display a Memorial Flag

There is no set answer to the question of how to display a memorial flag. The options are almost limitless, so long as they are done with integrity of the flag and honor and respect for the deceased, as well as the deceased's time of service. Other than those broad guidelines, there is little to restrict any plan that a family may have for the display of their loved one's memorial flag. Most flags are displayed in doors and, in most cases, the flag is displayed in a flag case. But that is not necessarily the only way a memorial flag can be displayed. An internet search for “memorial flag displays” will almost always yield an impressive number of photos of outdoor flag displays in which the flag is flown quite proudly. It is true that these displays require much more attention to maintenance - for example, in bad weather, an outdoor flag should be taken down - but, for many families, the extra energy and work is worth the effort to preserve a loved one's patriotic legacy.